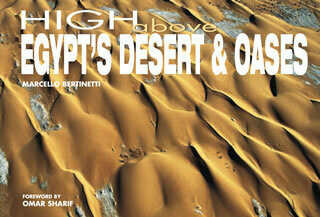 High above Egypt’s Desert and Oases

Photographed from the sky, Egypt shows the best of itself. The course of the Nile, which cuts the desert in two from north to south, and the enormous Delta provide glorious, lush vegetation sliced by a deep blue band. The white sails that slide over its waters and the spectacular monuments that line its banks, the human ants’ nest of Cairo, the Pyramids and the Sphinx, palm groves and fertile fields, rocky mountains, coral seas, and the ever-changing waves of the dunes in the desert: all of Egypt’s magical panoramas and incomparable light are offered here in this series of five spectacular new books, together constituting the greatest collection of aerial views of the country ever made.