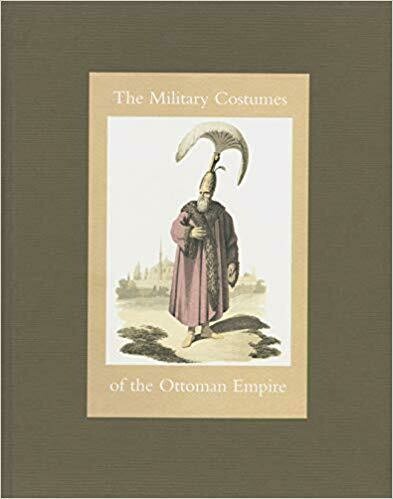 The Military Costumes of the Ottoman Empire

English writings on the Ottoman empire grew in the seventeenth century, following the establishment of official commercial relations between London and the Sublime Porte in 1580 and a permanent English diplomatic mission at Istanbul in 1583. This stunningly produced reprint of the classic The Military Costume of Turkey: Illustrated by a Series of Engravings from Drawings Made on the Spot: Dedicated by Permission to His Excellency the Minister of the Ottoman Porte to His Britannic Majesty, originally published in 1818 by London publishers Thomas McLean, features a set of annotated plates with descriptions of thirty military ranks and roles in the Imperial Ottoman army. The images, which are carefully colored by hand, depict costumes of the Ottoman army on the eve of drastic early-nineteenth-century military reforms that were to lead to major changes in army apparel. They not only reflect the way in which costume in Ottoman society was directly linked to social status, rank, and power, but also European fascination with the Ottomans’ attention to and emphasis on dress and public appearance. With an introduction by historian Tamer el-Leithy.